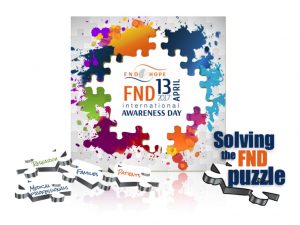 Putting the puzzle together one piece at a time.

Since 2012, FND Hope has been uniting with amazing people just like you from around the globe (over 53 countries to be exact, but who’s counting?). The bigger we grow the louder our voice for change is! Thank you to all the donors, volunteers, bloggers, participants who tweeted, wore a twibbon, face booked, shared their stories, nominated their caregivers and shared videos. Together we are exposing an invisible disorder and shifting the medical community’s attitude. The more we unite, the more we are empowered!

Functional Neurological Disorder provides an umbrella term for a variety of symptoms of apparent neurological origin but which current models struggle to explain psychologically or organically.  Presentation may be similar to a wide range of other neurological conditions. FND/CD can be as debilitating as Parkinson’s disease and MS and have many similar symptoms. The most common misconception is that patients are in control of some or all of their symptoms. The patient does not consciously produce functional symptoms. A patient with conscious control of their symptoms has a different diagnosis such as Feigning, Malingering, or Munchausen Syndrome.

Very few effective treatment plans exist.  Physical therapy is the most effective form of treatment with a goal of re-introducing proper movement and motor control. The most common treatment plan is Cognitive Behaviour Therapy (CBT). CBT is most effective for patients who have a known psychological connection to their symptoms. Lack of understanding the condition has negatively influenced treatment and care. Researchers, money, and volunteers are greatly needed.

Functional Neurological Disorder can present with any motor or sensory symptoms in the body.

Those with a functional diagnosis are not making up their symptoms (malingering).  FND Symptoms cause financial, physical, mental and emotional distress and cannot be turned on and off at will. Like many illnesses symptoms may wax and wane.